Often, hairy ball theorem is mentioned as an application of degree theory derived from singular homology in algebraic topology or from de Rham cohomology in differential topology; we also mentionned it as an application of Brouwer’s degree in Brouwer’s Topological Degree (III): First Applications. Here we describe an argument due to Milnor, exposed in Gallot, Hullin and Lafontaine’s book Riemannian Geometry, using only integration of differential forms.

For convenience, we begin by exposing some basic definitions and first properties about integration on manifolds.

is a smooth manifold, let

of sections of the

-th extorior power of the cotangent bundle).  We say that

is orientable if there exists an atlas

, said oriented, such that

is orientable if and only if there exists

. Such a differential form is a volume form.

be a volume form and let

be a family of charts covering

is a volume form, we can write

does not vanish. Without loss of generality, we may suppose that

(otherwise, switch two coordinates of the chart). Then

is an oriented atlas.

be an oriented atlas and

be an associated partition of unity. Then

is a volume form.

As an example, we may mention the differential form

induces a volume form on

viewed as the unit sphere in

is the canonical volum form of

as a Riemannian manifold. In particular, we define

An interesting property of volum forms is that, if

is a volume form and

. It is clear locally, and then it is sufficient to extend it globally using a partition of unity.

be an orientable compact

-dimensional smooth manifold. There exists one and only one linear map

such that for every

supported in an open chart

Sketch of proof. First, suppose that such a linear map exists. Let

be a finite family of charts covering

(such a family exists by compactness) and

be an associated partition of unity. Then necessarily:

is uniquely defined by the mentionned properties. Conversely, it is sufficient to show that the above equality does not depend on the family of charts and on the partition of unity chosen. An argument for that is to notice that if

is a diffeomorphism between two open subsets

otherwise. We can write 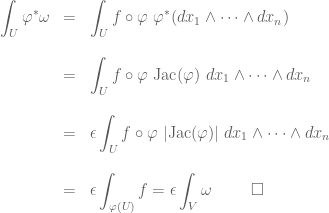 Using the proof above, we may notice:

is a diffeomorphism then

is even, any continuous vector field on

be a continuous vector field on

is a map satisfying

. By contradiction, suppose that

According to Stone-Weierstrass theorem, it is possible to approximate

by a sequence of smooth maps

denotes the orthogonal projection of

is a sequence of smooth vector fields on

. Therefore, we may suppose without loss of generality that

[Such an argument may be generalized to other manifolds; see Tubular neighborhood.]

be the volume form as defined above by the restriction on

First, let us show how conclude the proof if

be a diffeomorphism from

and  as mentioned above

is a polynomial in

. Of course, it is only possible when

To conclude the proof, we shall see that

is a diffeomorphism when

is sufficiently small. From

are bounded so the quantity

does not vanish when

is a volume form and

were not injective for

small enough, there would exist sequences

The first term has norm one,

and the last term is bounded according to mean value theorem: a contradiction.

is an injective immersion, and consequently a local diffeomorphism according to inverse function theorem. In particular,

is open but also closed by compactness of